At noon the sky above the cathedral splits in half –
Light and shadow play across the city square like fireflies.
A woman orders us to wear a mask and promises there’ll be no rain. She says
there’ll be a barbeque later by the river, then winks –
because we’re in on the secret to a ploy.
‘Later,’ she waves and disappears into the mottled crowd.

We’re marching out now, past the national flag, the cafés jutting into the bay.
We try to keep up with the woman. We see that, like us, she’s elated and
goaded by the music; we sing along with her to the protest song.

‘She has a way with words,’ my friend declares gesturing to her banner. ‘It’s not what you say, it’s how you say it.’

You can see she is a woman of humility

sceptical of authority and the system.

In those days
everyone talked about ‘the system’ as if it was a singular monster.
How to break it:

For:
The marginalised
The disaffected
The downtrodden
Us.

The system can be taken apart from the inside…but how?
Only in numbers is it possible…but who?
Without the centre, the margins can breathe…but where to start?

We lose sight of the woman, but we hear her singing about Industrial Relations.
We are now used to the gunshots
we suffer the loss of hearing
a kind of centring takes place in the
sweeping bend of time.

Up ahead the crowd fragmenting. Tempers trembling. Split-spit. Fighting. Shots. Flaring.
Illuminate your face. ‘Murder? Who? Why? Where?’ Horses buckle at the picket.
So many heads, so little time. That’s how it feels.
Not enough heads, too much time gone by. That’s how it is.
We pass a statue, defaced, swathed in toilet paper and other
unmentionables.

‘The firestorm is brewing,’ yells my friend and thumbs to the milling crowd beyond the bridge, unperturbed by the violence in our midst. I go to respond but I’m cornered, can’t move or see beyond the throng. There’s a pulsing behind us, urgent, electric.

My friend hums; warming to the song, the glow of possibility.

I catch up, chanting, rallying to the call. We’re part of another kind of history-making. My friend yells over the din, words flash familiar here and there, but mostly sound non-sensical. By the time the story ends, it’s clear how art became the Art of War.

‘I have always been an agitator because to me it’s the poetics of place that matters… I remember the war, long before your time, and the differences. Here, there is a clear underdog. A clear victor… I hate to think about the other side. What it would take to turn the tables. Must we always be reconciling and not reconciled? What is this waiting, waiting for Godot to arrive or what? Some people are resistant to change, I tell you. Some people don’t know how… This is the language of futility… Pick your battles wisely not my brain. It matters who is speaking… Everything has a value.’

I ponder this: how words can kill and claim you; how art calms, confronts, offends. My friend uses photographs like cut ups, threading opposites together to make bridges and monuments. Street scenes and moments from a Berlin childhood. Marking time, making space, orienting bodies to the particular.

‘The memories come in fragments like half-remembered songs. It could have been anyone’s bad summer.’

My friend is right. This is anyone’s race. That was the problem. It’s all for the taking.

Take today for instance. A time described as catastrophic. The world in shellshock. It’s all for the taking and not in a good way. Overpowered characters. Humankind is taught a lesson on nature and messing with reality. We are taking ourselves way too seriously. Today’s problems are tomorrow’s products. It’s all one big advertisement. But my friend’s optimism shores me up, connects me to another time and place. Like last summer when my sister was asking you about the Seventies. Your conscientious work in the anti-Vietnam War Movement. That eager experiment in street theatre, perhaps what inspired all this fighting against the odds.

How is everything for you today?
Oh, you know, good, I think.
How are you feeling?
Better today.
You still call yourself an activist?
More like ally or accomplice. There’s a difference you know.
Ah! Tell me.
An accomplice is part of the crime.
Does the accomplice benefit or get off lightly?
Well they are part of the robbery.
So the robber gets the higher penalty for doing the deed?
Not necessarily. Not here.
So, know your place.
Or thyself. Something like that.
Quoting Socrates again I see.

And to think we were engaged in small talk about the weather on the phone. Before the world collapsed. Before technology became about so many faces on a screen weighing down my bloodshot eyes, our fighting spirit,
making it impossible to read your body language.

Making no other point here than to say we must roll with the punches and ride with it, move your feet,
the rest will follow. Because protesting against the destruction of ecology deserves more
than a tweet.

We loop the city, and dawdle along the river, the avenue
of honour where
tomorrow’s children will gather at the cross to
commemorate the fallen
to lest we forget.
The sky loses promise, hovering low-grey and

cheerless. Pressing down in angles that can only be described as
diminishing.

We locate the woman we met at the start of the march.
We smile, she sings: ‘Ready?’ and fans her arms out to the water. In my excitement
I almost dance the victory song as we make our way upstream. Tip-toe-tapping itchy feet. Leaping ahead of myself.

Tell-tale signs play around your eyes. I can’t help but look away;
as if the performance wasn’t central to the cause.

In the water, dotting this-way-that, cruise ships drift in the bay as
rowers pick up pace, slipping downstream. The Master shouts commands.
How is it
that we lose ourselves to the purpose?
We laugh

seeing the costumed protesters skipping. To the bridge, to orchestrate their clandestine operation
to occupy the bay in

We’re in this together         upstaging
Softly trilling forbidden melodies.
Don’t even think about the choreography
as if everything’s disconnected.
Nature. Nurture. Liberty.

We reach the encampment, so many people readying to riot to
strategize, guerrilla warfare dressed up as creative weaponry.
But this is sea theatre, an invasion for re-enactment, the
known and unknown come together as words and signs

risk-taking, memory tricks;
complete with smoke signals telling us where to anchor.
My friend whispers: it’s all in the timing, passing me an oar, seeing
how the play of weather is adding to the drama.
‘You’re taking me an ancient way,’ I say,
that only a true boatman can hope to remember.

we duck for cover,
steal away

we dream to reconceive, atone for
stolen victories

we push off through the river-mist;
there are more of us. We glide out through the water, watch the rain fall
like a curtain and, before we
glimpse the clap of lightning, feel its
deep shudder through the land. 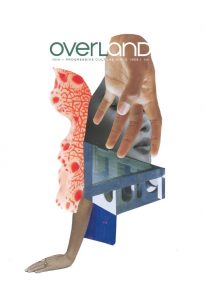